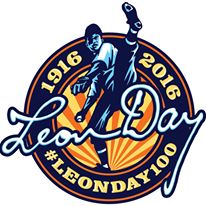 Editor’s note: On Oct. 30, Hall of Fame pitcher Leon Day would have been 100 years old, and I wanted to commemorate the landmark day in this blog somehow. I thought about what I could write or say, but then I decided to let you, my readers and the Negro Leagues community, to say it with your words, thoughts, feelings and memories.

Helping me was Michelle Freeman, who’s done a yeoman’s job with the Leon Day Foundation in Baltimore, which has striven to honor Day’s memory and promote his achievements and impact on the national pastime, including a series of upcoming events to mark Day’s centennial birthday.

So many thanks to Michelle and to everyone who contributed comments for this blog post. Without further ado, let’s get to honoring Leon! …

Well, I heard of Leon Day as a fan of the Newark Bears, who had is name on the stadium’s Wall of Honor, but really did not know about his career with the team until meeting you, Michelle. So what he means to me is that through his legacy, we forged a friendship. And through the Jerry Malloy conference I became friends with Ryan, Rod, Leslie, Susan, Ted, Belinda, Larry and Jay. I have developed a deep appreciation for this league, especially the teams that played in New Jersey and New York.

Tod Bolton and I used to go to Leon’s house every year when the [Hall of Fame] Veterans Committee would meet. Monte Irvin, who was on the committee, was the driving force for Leon’s enshrinement. He would tell me he would call after the meeting to let us know of the committee’s decision. In 1994, [Day] didn’t make it, as we know, and I said to Leon, “You know they are just waiting for you to die,” and Leon said, “I’m going to stay alive just to piss them off.”

I loved Leon as he was a man with a great, dry sense of humor with the scratchiest voice. Another memory was when Leon was appearing at a card show with Joe DiMaggio and they took a picture together. Joe was asked in front of Leon if he ever faced Leon, and he said no, and Leon said he’s lucky he didn’t. I miss the man.

If I knew then what I know now …

In the early ’90s, I attended a gathering of former Negro League greats at the Pratt Library in Baltimore. Among those scheduled to appear was the great righthander Leon Day. Realizing that my friend, Steelton’s Paul Dixon, and Leon had been teammates on several teams in the ’30s, I made a mental note to discuss Paul with Leon.

Upon meeting, Leon could not have been more warm, friendly and open. In my scarce few minutes with the great pitcher, we discussed Paul, and he shared some adventures that they had had, and he gave me his phone number to pass along to my friend Paul.

Sadly, we did not discuss Rap Dixon, Paul’s older brother, much at all, although Leon did tell me that he never saw Rap play in his prime, and he added, almost as an afterthought, that Rap Dixon had been his first manager. Leon signed a baseball that already included Hall of Famers Buck Leonard and Monte Irvin, and a dozen others. We parted and went about participating in the wonderful event.

A few years later, my autographed baseball added a third Hall of Famer when on March 8, 1995, Leon Day received the call from the Hall informing and congratulating him upon his election. Sadly, Leon passed just a few days later and never made it to Cooperstown for his induction later that summer.

Years later, I received an answer to my unspoken question. In the intervening years and up to the present day, I remain convinced that Rap Dixon, my friend Paul’s brother, belongs alongside Leon Day in the National Baseball Hall of Fame. I had always wondered what Leon really thought of Rap Dixon as a player. In 2001, William F. McNeil published a book entitled “Cool Papas & Double Duties: The All-Time Greats of the Negro Leagues,” in which he surveyed many former Negro League players about who they would select as an all-time starting nine. To my extreme pleasure, I found Leon Day was one of the players surveyed. I immediately went to Leon’s page and found he named the following players to his all-time lineup … the ninth player, in position No. 9, the right fielder, was, to my utter joy, Rap Dixon. In his all-time nine, [Leon] had named eight Hall of Famers (only five of which were so honored at the time) and Rap Dixon. 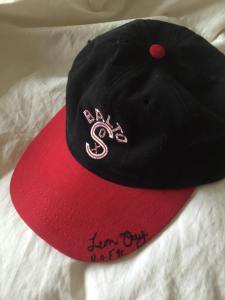 I met Mr. Day at the 1990 players’ reunion in Baltimore. He was a delightful man to speak with. I asked him about the ball players he enjoyed watching when he was kid, and it was through him that I first learned of players like Jud Wilson, Oliver Marcell, Rap Dixon, Pete Hill and Laymon Yokely and the Baltimore Black Sox. I knew I had to learn more about these players and this great team that he spoke so highly of! He signed a hat and some cards for me. After he made the Hall, his wife Geraldine added “HOF 95” to the hat for me at another Negro League event. I cherish it and still have it and wear it on a few occasions.

One word: Stud. He could do it all.

I was inspired by his spirit to want to continue to tell the stories of these incredible people.

I think Leslie’s brief but powerful comment is a good way to summarize and conclude this post about one of the greatest pitchers of all-time. Again, many thanks to everyone who contributed something, and if anyone else wants to add their thoughts or comments, add them below, or email me at rwhirty218@yahoo.com.

And, of course, Happy Birthday, Leon! 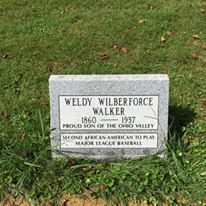 The new headstone at the grave of Weldy Walker. (All photos courtesy the Moses Fleetwood Walker Day Facebook page)

Editor’s note: Because I’m a little swamped now with attending to matters outside of my work, research and writing, I decided to solicit guest commentaries, posts and comments from outside contributors on subjects with a recent news peg or angle. I’m extremely grateful to everyone who has volunteered and agreed so far, and if anyone else has something timely they like to pitch, definitely shoot me an email at rwhirty218@yahoo.com.

This post marks the first installment of that effort. It’s a commentary from SABR member Craig Brown, who toiled with the Negro League Baseball Grave Marker Project to raise money for, create and place a headstone at the previously unmarked grave of Weldy Walker, the second openly African American to play in the Majors, following is brother, Moses Fleetwood Walker. The efforts of Craig and others came to fruition last month, when a beautiful new marker was installed at Weldy’s burial spot. Below is a commentary written by Craig to mark the occasion. Enjoy, and congrats to Craig and his helpers on their success!

The harsh reality is that no one remembers who came in second place. Whether it is fair or not, that is the truth. Who is the Olympic athlete with the most silver medals? Who was the second man to lead a ship to the New World? Well, that was Christopher Columbus. We only know that because so many people believe he was first. The second African American to play Major League Baseball was Welday (Weldy) Walker, and nobody remembers him.

It is disappointing nobody talks about the people who came in second place. After all, they worked hard and accomplished great things in their own right. Maybe it is because people only have so much room in their head, and they just want to save space for only the most “Important” of things.

Welday Walker was “second” throughout his life. He was the second son of Moses W. Walker and Caroline O’Harra Walker. He was the second Walker boy to attend Oberlin College and play baseball. He followed his older brother, Moses Fleetwood Walker, to the University of Michigan. He later became the second African American to play Major League baseball on July 15, 1884 as a Toledo Blue Stocking. Of course, this is after his older brother debuted as the first African American to play Major League Baseball on May 1, 1884. Walker was used to doing things after his brother. We can only imagine the intensity of this sibling rivalry.

Still, there is a very good reason that Welday should be remembered in his own right. Being one of only two African Americans to openly play Major League Baseball as almost 80 years before Jackie Robinson broke the color barrier is a pretty big deal. The very presence of the Walker Brothers in Major League Baseball actually created the color barrier. Both of these men were pioneers and deserve credit for showing the world that African Americans were capable and in every way equal to white Americans. They were testaments against the prevailing view of Social Darwinism.

Both Walker Brothers are historic figures. They are both important pages in the book of baseball history and were both civil rights pioneers. It is in the latter respect where Welday separates himself from his older and more recognized brother.

Shortly after the Civil War and in an environment rife with racial tension, Welday and a friend won an anti-discrimination lawsuit. In 1884, Welday and Hannibal Lyons were denied admission to a skating rink in Steubenville, Ohio, because they were black. They sued. They were portrayed in the media as troublemakers, but the judge issued a favorable ruling. Each plaintiff was awarded $15, but as indicative of the times, they were still not allowed to enter the rink. 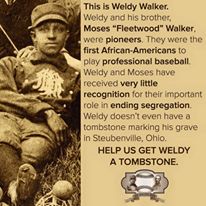 By the end of 1884, the unofficial ban on blacks in baseball would keep the Walker Brothers and other talented African Americans out of Major League Baseball, but for a few years, the Walkers and others would play in “minor” leagues.” Of course, eventually racism would end their playing days on that level too.

In 1887, Welday was playing for the Akron Acorns. That year Welday learned that racial segregation was becoming the norm in minor leagues and he learned his days playing on an integrated baseball field were coming to an end.

This prompted Welday to commit his most memorable act. He penned a letter to the president of the Tri-State League objecting to this policy based on racial discrimination and ignorance. He argued, “There should be some broader case – such as want of ability, behavior, and intelligence — for barring a player than his color.” Two years earlier, while playing for the Cleveland Forest Cities, Welday batted .375. His ability was never the issue.

Ten years after Welday’s short time with the Acorns, a black man was lynched by the citizens of Urbana, Ohio. Welday was outraged by the lack of action by state government. He blamed Gov. Asa Bushnell for a shoddy investigation, and formally left the Republican Party. He then helped form the Negro Protective Party.

Both Moses Fleetwood Walker and Welday Walker were interred in unmarked graves in Steubenville’s Union Cemetery. In 1998 Oberlin College’s Heisman Club erected a tombstone at Moses’ grave. The act made headlines and once again revived the memory of Moses Fleetwood Walker as what he accomplished as the first openly African-American player in Major League Baseball.

A couple of months ago enough money was raised in connection with the Society for American Baseball Research to buy Welday Walker a headstone. We hope to plan a ceremony in the spring. It is our hope that people will begin to talk about the African-American man who was second to play Major League Baseball. We also hope that this act will lead to a broader discussion about Welday’s life as a vocal opponent against discrimination and as an early civil rights pioneer in his own right.