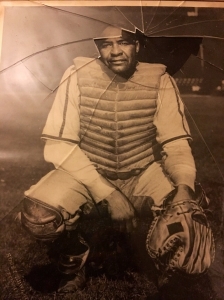 Here’s an email I received last month from reader Guy Provenza after I had an article about the Duncan family published in the Kansas City Star. Guy related his incredible personal experiences with the different generations of Duncans. Here’s his message:

“My name is Guy Provenza and I just read your article in the Kansas City Star about the Duncan family of the Negro Leagues. I can’t tell you how excited I was to read this! For a few years I worked with Frank Duncan III in Southfield, Mich. He was the doorman at the Radisson Hotel, and I worked for an audio-visual company located inside the hotel. We spoke daily and had lunch together at least three times a week in the cafeteria.

“I used to love his stories about Satchel Paige, Count Basie, Jackie Robinson, Charlie Parker and other Kansas City celebrities that he had known through the years. In fact, I gave Frank the news one morning that Roy Campanella had died. After he told me how close they had been, I felt like a jerk for delivering Campy’s obit to him so cavalierly.

“In 1999 I left that company and learned shortly after that Frank had passed. Since then, I have become a Negro League fanatic and tried to read everything I can about those times, especially Frank III. I have a Google alert set for ‘negro baseball,’ which is how I saw your article. So many questions I wished I could have asked Frank. I am happy to learn that Julian still lives in the Detroit area and will try to look him up.

“I can verify the stories about Frank’s modesty. He told me the same thing about being the first father-son battery that he told Brent Kelley, saying the newspapers made a bigger deal out of it than it really was.

“Frank said that Satchel liked to bring this ‘raggedy ass guitar’ he had over to the house ‘because my mom liked to sing.’ He had told me that his mom sang in a band with his uncle, George E. Lee. Typical Frank understatement! I learned after he died that his mother was Julia Lee, who not only ‘sang,’ but was invited to the White House to perform for President Truman and was quite a star in her own right!

“Please forgive me for the long email. I have never been able to track down an article that mentioned the father-son battery, but thanks to you I know to check out the New York Amsterdam News. Since looking you up online I’ve bookmarked The Negro Leagues Up Close blog and plan on reading more of it this weekend.

“Thanks again for making my day!”

Many thanks to you, Guy, for making my day with your email, and thanks for letting me post it! Keep reading if you can.

One thought on “Fond memories of the Duncans”