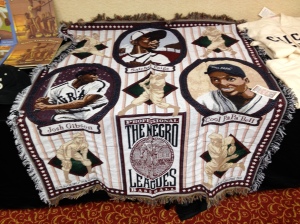 Then, this morning, my day began by meeting with Michael Rose, a reporter from the New Pittsburgh Courier, who had contacted me about doing a story about this family gathering here where the three rivers come together. When Michael’s story comes out in the Courier, you can be sure I’ll post a link to the story on this blog.

Thus, it’s been an eventful and quite exciting start to a conference that’s without a doubt a major highlight of my year every time I come, which now stands at four years and counting.

But, as we found out yesterday morning, this event almost didn’t even happen. In fact, I don’t think many of us here in attendance realized how close we came to not gathering at all this year.

As Larry told us in his introductory statements yesterday morning, the death of our longtime and beloved co-chair Dick Clark, who for so long was the heart and soul of the Malloy conference, hit everybody hard, but Larry especially took the news with great difficulty. Larry’s sorrow, as he told us, drained him of the desire and emotion needed to organize the conference by himself, nearly leading him to cancel the event for this year.

“I didn’t want to do it without Dick,” Larry told us. “With Dick missing, I decided not to move forward. I just didn’t think I’d be able to do it. Many of you knew him. He was a great guy, and there wasn’t a racist bone in his body. He’s the one who really put this conference together.”

Into the void stepped George Skornickel, the chairman of the local Forbes Field Chapter of SABR, who felt that he had to do something to help Larry out and make sure the Malloy conference soldiered on in 2015.

Larry said it costs about $35,000 to put on a Malloy conference, and after all the registration and fees are in, the officials planning and hosting still have to raise about $25K of that to make it happen. But SABR members and other baseball historians and fans came through this year with donations to the Society home office in Arizona with all ranges of checks — $100, $1,000, you name it — and it happened.

There will be a tremendous presentation at tonight’s conference-ending banquet and awards ceremony in honor of Dick Clark, and you can be sure none of us will miss it.

So far, the event has been a thrill, and I’ve gotten to see so many old friends — Larry, Leslie Heaphy, Ted Knorr, James Brunson, Karl Lindholm, Phil Ross — and meet a bevy of new ones, such as Miss Michelle Freeman, a Malloy first-timer, a native of Kansas City who now lives in suburban Baltimore and heads up the wonderful Leon Day Foundation, which promotes and honors the legacy of that legendary Negro Leagues pitcher and Hall of Famer. Michelle was also instrumental in starting up the brand new SABR Babe Ruth chapter in Baltimore.

Mr. Knorr and I are roomies at the conference for the third year in a row, and this year we’re joined by Lou Hunsinger of Williamsport, Pa., who thus far has been a sterling addition to our little room at the Wyndham Grand. Lou is actually the public address announcer at the Little League World Series every year, which is pretty darn cool, if you ask me. I must apologize right off the bat here to Ted and Lou for waking them up after 1 a.m. Thursday because I was writing my last blog post about Luke Easter’s time with the Homestead Grays at that ungodly hour!

I was also able to get my hands on my prized purchase from this conference — a custom-made Rap Dixon for the Hall of Fame T-shirt (size XXXL so it can fit over my way-too-large belly) from Ted: 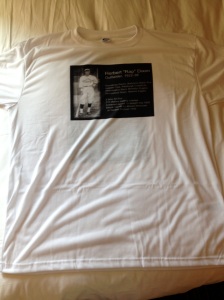 These fantastic comrades, plus the fantastic presentations, are what makes these Malloy conferences so special for me. As Larry said, “We have the best baseball minds in the country right here today.”

I’ll get more into the presentations themselves in a later post, maybe tomorrow (Sunday) evening, because there’s already been so many incredible ones, with more to come.

But right now I need to truly thank Robert Paige Jr., the son and eldest child of the great Satchel Paige, who made a rare public appearance yesterday for an hour-long Q&A session that was by turns both touching and uproarious. Robert, or Bob, is a towering fellow — he stands at 6-feet-8 — and one of the most gregarious and talented storytellers I’ve been witness to in a while.

Bob graciously granted me a one-on-one interview before he headed over to be honored at PNC Park before the Pirates-Dodgers game for an article I wrapped up last night for the Kansas City Star. As of now, the story is scheduled to appear in tomorrow’s paper, and I tried to capture the essence of Bob’s talk, his experiences growing up with the best pitcher in baseball history as his father, and what it’s like carrying on his dad’s legacy. I’ll post a link to the article when it’s out. 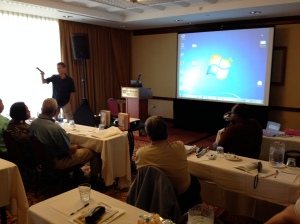 I’m also looking forward to meeting with members of Jimmie Crutchfield’s family, who are attending this year’s conference. Crutchfield, a member of the great Pittsburgh Crawford teams of the 1930s, was the very first beneficiary of the nationally known blessing and foundation known as the Negro League Baseball Grave Marker Project.

“It’s always a highlight of my year to come to it every year,” Marc said. “It’s great to see everyone. I see a lot of familiar faces. This really is a big part of SABR. Out of all the hundreds of calls we get to our home office, most of them are for the Negro Leagues Committee.”

On that note, I’ll humbly sign off for the evening and do my best to post something after tonight’s banquet, then discuss some of the presentations that were made this weekend in a post that’ll hopefully come Monday.