As I pursue research on Clarence “Waxey” Williams for one article (and hopefully more), a pretty remarkable picture of the man and the player is quickly crystallizing. Before I really started digging into his life and career, I knew him primarily as a top-shelf “colored” catcher (an sometimes center fielder) a few decades on both sides of the turn of the century, largely for the great Cuban Giants, beginning circa 1880s.

Williams is also at the front of the list for the nationally known Negro League Baseball Grave Marker Project — Williams is buried near Atlantic City in an unmarked grave, a situation that the NLBGMP, led by local volunteer Michael Everett, is quickly trying to rectify.

But now that I’ve really dug into the meat of Waxey’s story — a process I began with this blog post — a fantastic and, shall we say, colorful portrait emerges, one that for me, for one, was heretofore unknown.

Williams was a native of Harrisburg, Pa., and apparently he was quite the well known character in his hometown. Since research into segregation-era baseball began several decades, we know that Harrisburg was a focal point for a great deal of African-American hardball history, with great teams and individual players either emerging from or competing in the city.

Waxey Williams was one of them. While Williams wasn’t on the level of should-be-Hall-of-Famers like Rap Dixon and Spottswood Poles in terms of playing ability and achievements, he still made an indelible mark on the game, frequently via his lively tongue and wacky histronics on the diamond.

But, if the contemporary Harrisburg press is to be believed as they told it at the time, Waxey Williams also etched his name into local history through the law — both sides of the law. According to the papers, Williams was constantly in local courtrooms for a series of alleged crimes, often including robbery, assault and/or battery. (No, that is not a dorky reference to that lame Genesis song. Genesis ended when Peter Gabriel left. Period.)

Those run-ins with Johnny Law might have begun as early as 1878, when, at the age of 12, young Clarence was busted for allegedly stealing pears from a farm in Susquehanna while he was supposed to be herding cows in a nearby pasture. The Harrisburg Patriot wrote at the time that “there are a number of incorrigible boys in the city who annoy the farmers of Susquehanna and neighboring townships almost beyond endurance.”

This, mind you, despite the fact that Clarence’s father, William Williams, was reportedly the first African-American member of the Harrisburg police force (a tip I got from Harrisburg buddy and Malloy conference roomie Ted Knorr). Of course, William Williams was inexpicably removed from the HPD in April 1885 for reasons unclear but which I’m sure had absolutely nothing to do with race.

But for Clarence, it all steamrolled from there. And the press’ scrutiny of Williams only intensified once he became a member of the famed Cuban Giants, who played in Harrisburg quite often during various seasons, leagues and incarnations. The Cuban Giants were a major attraction in the city of Harrisburg, and their players, including a native like Waxey Williams, were highly publicized.

And there was a chance that such popularity was due to the white sporting public’s sheer curiosity in African Americans and their culture, almost as if black players were novelties — albeit highly respected novelties, at least for their diamond prowess. 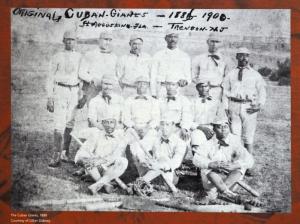 Proof of these attitudes of the white population toward people of color could possibly be found in the way the local newspapers reported on whatever type of incident in which Waxey Williams was involved — almost always writers referred to him as some variation of “Clarence Williams, the famed colored ball player” or “the catcher for the colored Cuban Giants …”

“Christian Crone, a Susquehanna township farmer, sued Clarence Williams, the colored baseball player, for slapping his face at Verbeke street market … It is said the troubles arose over some vegetables.”

About a year earlier, this appeared in the Patriot:

“Clarence Williams, the colored ball player, is in trouble. Last evening in the vicinity [of] Third and Broad streets, he became engaged in an altercation with Thomas Cunkle. The difficulty was terminated by the colored man striking Cunkle several times in the face. Cunkle, much used up, made information against his assailant at the mayor’s office, charging him with assault and battery. The colored man was arrested by Officers Stutsman and Johns and taken to the mayor’s office, where he was held for a hearing.”

Thus emerged a pattern, or an apparent pattern, at least. Williams’ legal troubles were even partially blamed for causing a less-than-stellar game to be played in June 1891. Stateth the Patriot:

“The game on the Island grounds yesterday was badly handicapped, owing to Clarence Williams being at court and [George] Stovey is sick in bed.”

But despite allegedly — and I stress allegedly — crossing the boundaries of the law on numerous occasions, Clarence Williams was actually appointed to be a police officer himself.

When John D. Patterson assumed the mayoralty in 1896 (his second stint in the office), he cleared house in the police department, a move that included anointing a bunch of new officers. In reporting the developments, the Patriot, naturally, referred to Waxey as “Clarence Williams, the colored base ball player …”

But Clarence’s tenure on the force was tumultuous and brief, terminating just months after it began in him resigning his position under pressure after reportedly beating the stuffing out of a prisoner. (This was a month or two after Waxey seemingly was caught napping while on duty, a “red mark” on his record that of course didn’t play into stereotypes of “lazy coloreds” at all.)

Clarence Williams’ tripping over the legal line continued into the new century and often made news, particularly the Harrisburg Telegraph, which, it appears, unlike the Patriot, didn’t cover sports much, because from what I could find, Williams’ status as a Cuban Giant was mentioned in the paper only infrequently and only then, for example, in reference to his son who was serving as part of Gen. John J. Pershing‘s epic but futile pursuit of Pancho Villa.

Here’s one instance, from March 1917, of how the Telegraph reported on Williams:

“Clarence Williams, together with his wife, accused of stealing a package of tapioca and a cake from the grocery store of S. Woolffe Lacob. Steelton, were placed on trial this morning. The case was closed at noon. Williams is also held for attacking Lacob when the latter attempted to recover the cake and tapioca from the pair.”

The Harrisburg media’s somewhat bizarre infatuation with Waxey Williams even veered into non-legal territory and into his personal life. And, much like the lousy supermarket tabloids of today, such reporting was sometimes satirical and/or sarcastic in nature. From the April 3, 1891, Patriot, under a header titled, “Clarence Williams’ Contract”:

“Clarence Williams, the famous colored base ball catcher, put his name to a contract last night which will bind him for life, and there is no report of him having received any advance money. Miss Helen Harris, a colored lass of many charms, caused Clarence to be so thoroughly hoodooed that he became convinced that he could no longer play ball and coach so uniquely, unless he should have the charms of his heart constantly by his side, and instead of the offer to sign coming to Clarence, he made the offer to Helen. It was an offer to marry. She accepted. Terms not made public. Look out for some great ball playing from Mr. Williams this season.”

The prose is almost cartoonish in nature. It’s not quite on the “black Sambo” level, but would the paper have reported on the marriage engagement of a white player so snarkily and with the term “hoodooed?” No, of course, not, only nutty “Negroes” allowed themselves to be mystified and hoodooed by a mojo hand.

But I’ll (finally) conclude this post by perhaps placing a frame of reference on why the Pennsylvania press might have taken such a view of Williams — and, indeed, other black players of the day — and how that view might have manifested itself in the papers. Here’s the Patriot transcribing a passage from a York newspaper of yet-to-be-ascertained identity in August 1889; after disparaging the Cuban Giants as “the champion kickers of the league” who pointlessly elongate games by constantly harassing the umps, the York paper stated:

“Clarence Williams, the catcher of the Giants, who patronized the grand stand yesterday, was boisterous and insolent in the highest degree, and in a loud voice, he decried the York players, and said among other things that the Trenton pottery boys club could beat such a club as the York club. He yelled at the umpire, sneered at the York players and indulged in all kinds of derogatory remarks. When remonstrated with he emphasized his insolence by insulting retorts.”

Insolence? Yeah, Cap Anson was never insolent on the field. He was always a perfect gentleman. And white players never flapped their yappers at umps and jeered the opposing dugout.

But when a black player as the audacity to trash-talk, it’s virtually a mortal sin. And actually, mere “insolence” was frequent a literal mortal sin, especially below the Mason-Dixon, where simply being “uppity” could get a black man lynched.

But, naturally, this all has to be taken into the context of the era and on a case-by-case basis, especially when it comes to the reportage pursued by the contemporary media.

So we may never truly know. But it doesn’t change the fact that one of the best backstops of his day has rested in an unmarked grave a fur piece from his hometown since he died in 1934.

More on Waxey Williams to come …

One thought on “More Waxey works”