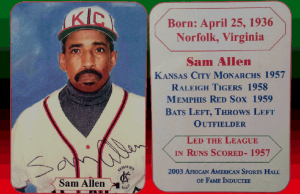 I’ve been really, really trying to land an assignment with the Raleigh News & Observer newspaper about the Raleigh Tigers, going so far as to contact former players in advance of any gig with the Triangle-based paper.

One of the players I’ve managed to talk to is Sam Allen, who competed for the Tigers in 1958, one year after he led the Negro American League with the Kansas City Monarchs and one year before the Tigers themselves joined the NAL.

Allen, a Norfolk, Va., native who retired there after finishing his baseball career, said he enjoyed his time in Raleigh, despite his assertion that Tigers owner Arthur Dove was a cheapskate who, for example, left the entire squad stranded in small-town West Virginia after the team bus broke down.

But one of the facets of his one-year stint in North Carolina’s capitol that Allen enjoyed was the team’s manager — Wesley Barrow!

I had a vague knowledge that Barrow had spent a season or two piloting the Tigers, but the kismet that unfolded when I talked to Allen was incredible. He divulged the information when he asked me where I was living. When I said New Orleans, he responded, “Our manager was a guy from there, guy named Barrow, Wesley Barrow.”

“I loved Wesley,” Allen told me. “He was a really great guy. He knew baseball. He was a great baseball man. He’s been around the game a while.”

That is certainly an understatement. By the time Barrow arrived in Raleigh, he had already spent roughly four decades in the organized game.

Unfortunately, from my chair in NOLA, I couldn’t immediately find any articles from the Tigers’ 1958 season in any databases; I have little doubt that local Raleigh papers from that year included coverage of the Tigers’ year that year, but from what I can tell the only way to access those issues is via microfilm in various repositories in North Carolina and Raleigh. maybe someday when I’m visiting the fam in NC …

(I should note that I reviewed microfilm of the 1958 Louisiana Weekly, but found no mention whatsoever of Wesley Barrow or the Raleigh Tigers at all. In fact, there was almost zero references to local NOLA blackball teams, because, my guess is, by that time they had all died out as a result of integration. Any baseball coverage the LW included that year was of African-American players’ accomplishments and achievements in the Majors.)

I did find a few articles about Raleigh’s 1959 and ’60 campaigns, when the Tigers were in the Negro American League, which, by that time, was on its very last leagues and, it could be argued, was little more than a loosely organized conglomeration of barnstorming teams.

A May 2, 1959, article in the Norfolk New Journal and Guide reported that Chicago native Phil Johnson had been inked to pilot the Tigers that year. Noted the paper:

“The Tigers, who are owned and operated by Arthur Dove, beat our [sic] several other cities to obtain a league franchise and will join the Kansas City Monarchs, Birmingham Black Barons, Detroit Stars, Memphis Red Sox and Newark Indians in the six team loop. …

“Manager Johnson reports that the Tigers have a nucleus for a very god club and standout play is expected” by a slew of players.

The Carolina Times, one of NC’s biggest African-American newspapers, also gave a small dollop of coverage to the 1959 Tigers and the NAL that year. A May 9, 1959, article in the paper refers to league prez J.B. Martin pontificating on the outlook for that year:

“The addition of two new clubs, the Raleigh Tigers and the Newark Indians, is sure to stimulate greater interest, the league president contends.

“All six clubs are in the last stages of their preseason training exercises and practically ready to go now.”

Now, to bring everything full circle … in 1960, the ever shifting roster of NAL teams still included the Raleigh Tigers but also resulted in the admission of the New Orleans-Detroit Stars. By whom were the Stars managed?

In fact, the Stars undertook spring drills in NOLA and were slated to open the season by hosting … you guessed it, the Raleigh Tigers.

The Tigers, by the way, were that year managed by Rufus Gibson, or at least according the May 21, 1960 New Journal and Guide.

But for several seasons, the Tigers endured a merry-go-round of managers who were signed then dismissed in a matter of months or even weeks. One of those skippers who ever-so-briefly signed on with Raleigh was Leon Diggs, who was also a native of … New Orleans!

In an ensuing post or two, I’ll try to further explore the linkages between the Raleigh Tigers and the Crescent City …

5 thoughts on “The Raleigh Tigers … and guess who?”