I know I said I’d wait until early next week to start blogging again, but I just couldn’t stay away. 🙂 I got the bug again. I miss it!

I’ll start off with a little bit about an example of one of the facets of Negro Leagues research that truly fascinates me — all the seemingly “little” semipro, sandlot and industrial leagues that came and went over the years. A great deal of them were specifically regional in nature, encompassing and including cities in a limited geographic area, often in spots from which you’d never imagine any sort of higher-level baseball circuit sprouting.

And, unfortunately, despite the best of intentions and the level of excitement behind their creation, many of these league’s last only one or two years tops, and a lot never got off the ground at all. I tripped across an example of this existing in the late 1940s in the coastal plains of North Carolina.

A little background … I was raised (as I’ve annoyingly yet proudly mentioned many times before) in Rochester, N.Y. But when I was a junior in college, my father and step mother moved to a small city in eastern North Carolina called Rocky Mount. As a very important side note, Rocky Mount was the hometown and lifelong residence of the great Buck Leonard.

When I graduated at Indiana U., I decided to head to NC and see what life was like there. I eventually spent two years living and working in Tarboro, N.C., which itself has its own surprising Negro Leagues connections, as my article here in the Raleigh News & Observer demonstrates regarding Hall of Fame hurler Bill Foster.

Since then, I’ve moved around all across the country, and my parents moved first to Raleigh, then to Atlantic Beach, N.C., for their retirement years. I visit my folks there occasionally, and I’ve gotten to know the region, dubbed the Crystal Coast, a little bit. The area includes Carteret County and one of its biggest burgs, Morehead City, which is across Bogue Sound from Atlantic Beach.

And since I’ll be visiting my parents in AB over the holidays, I was pondering going to a local library and reviewing some regional newspaper archives to see if the region has any history of African-American baseball. As preparation for that process, I did some internet researching for baseball in Morehead City, and in doing that, I tripped across …

In early 1948, a year after Jackie Robinson debuted in Brooklyn, six small cities — a few of them little more than small towns, in fact — in the coastal plains of North Carolina decided to put up teams in the nascent ECBL, including New Bern, Morehead City, Washington, Oriental, Trenton and Pollocksville.

To be honest, I’d never even heard of those last two communities, and I’ve only vaguely heard of Oriental, mainly because of its un-PC name (at least for this day and age). These towns were perhaps bigger and more important six or seven decades ago than they are now, of course, but from this 21st-century perch, it seems unlikely that such small communities could sustain any sort of organized baseball circuit.

But that’s what’s special about the world and history of baseball — the imaginations and ambitions and move of the game that permeates every level of society, including in the African-American community.

Apparently, representatives from the half-dozen municipalities met in New Bern in late March to organize the new loop and chose its first slate of officers: Floyd Brown of Trenton, president; Allen Brown of Pollocksville, VP; Roy Stiles of Morehead City, secretary; and John Price of Washington, treasurer. The board of directors included Morehead City’s Anthony Dudley, Trenton’s G.O. Franks, Allen Mann of Oriental, Washington’s William Marsh, and Harry Brown of Pollocksville. In addition, at the time of the loop’s creation, the founders were seeking two more teams as well.

Unfortunately, however, it appears the grand plans for the East Carolina Baseball League turned to dust almost immediately and the league never got off the ground — I couldn’t find any more references to it in various online archives, and the only game report I could find on a contest between two of the cities in the league in 1948 was a 25-2 beatdown the Trenton Blue Sox put on the New Bern Eagles in late April. I couldn’t determine if those two teams were even each city’s representatives in the ECBL.

But it looks like the Trenton Blue Sox were a fairly established semipro team in that town, with a history stretching back to at least 1939, when the Norfolk New Journal and Guide reported on the Sox’ 3-0 win over the Jacksonville Giants and 6-5 trimming of the Camp Patterson Yellow Jackets. Around that same time of July ’39, the Blue Sox inked solid-hitting shortstop Jimmie Barber, then a sophomore at North Carolina A&T in Greensboro, for the rest of the season.

Barber seems to have stuck around with the Sox, who went 18-4 during the 1939 season, when they were managed by Floyd Brown, who would become the president of the failed ECBL in ’48. Barber eventually took over the managership of the team, including during the 1948 campaign.

That year, in addition to their win over New Bern, the Blue Sox beat a team from Red Hill and a squad called the Jacksonville Pepsi Cola Joint. That last opponent most likely represented the Pepsi Cola Bottling Company in Jacksonville, N.C., a small city that is best known today for being the home of Camp Lejeune U.S. Marines Corps base. (Actually, the Pepsi Cola company itself was founded in New Bern, which I did not know, so Jacksonville, N.C., just a little ways away, who have been a natural spot for a Pepsi bottling supply company.)

The Blue Sox lasted until at least April 1952, when the New Journal and Guide reported their season-opening, doubleheader sweep of the Oriental Hornets. At the time, Jimmie Barber was still the manager.

Actually, Barber was a native of Trenton native who was quite active in his hometown community. But, perhaps more importantly, he went on to become a professor and dean of men at NC A&T as well as a Greensboro city councilman. He now has a city park named after him. 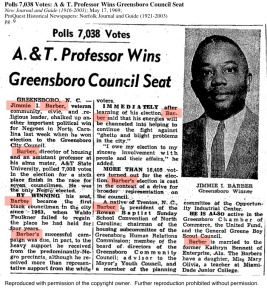 And that, gentle readers, is something else that enraptures me about black baseball history — the fact that the sport so often served as a springboard for and a precursor to the civic success and impact of so many African-American men (and women!). Blackball wasn’t just about a sport, a simple game. Its influence reached into so many aspects of American life and society — and not to mention geography — that it simply cannot be shrugged off as an “unfortunate” historical anomaly or anachronism from a time when equality for all men and women was a farce and falsehood.

And it’s pretty cool that a supposedly obscure town like Trenton, N.C., played a large part in creating the Negro League painting on the canvass.