A few months ago I wrote this blog post about the Berkeley International League, baseball in the Bay Area and a promoter named Byron “Speed” Reilly, topics I tripped across while looking into the West Coast Negro Baseball League (on which I did this article and this one) as well as some Negro League players who competed in the historic, integrated California Winter League.

Then I encountered (I can’t remember how this one happened) a team called the Van Dyke Colored House of David, a fleeting comet of a semipro black team based in, of all places, Sioux City, Iowa, and patterned after the famed barnstorming religious team, the House of David, based in Benton Harbor, Mich. The Van Dykes’ top pitcher for a few months was Yellowhorse Morris, a murky but phenomenal hurler from … the Bay Area! I then discovered that when they toured the West Coast, the Van Dykes played the Athens Colored Elks, one of the squads in the Berkeley International League and that loop’s forerunner, the Berkeley Colored League.

It was then that I first got a major inkling, almost an inherent researcher/journalist instinct, that so much of ethnic baseball history was and is interconnected, and the Bay Area hardball scene was perhaps the greatest example of that — of how different ethnicities and a slew of fascinating, colorful characters crossed paths.

I’ve had that gut feeling confirmed over the last 24 hours, when I came in contact with Ronald Auther, an African-American blogger, writer and researcher based in Michigan whose grandfather and other elder relatives played for the Athens Elks, the Berkeley Grays, the Berkeley Pelicans and a bunch of other baseball squads at a time when blacks and whites simply didn’t maintain sports on the same rosters, even in a traditionally “progressive” region like the Bay Area.

Ron posted a comment to my “Speed League” blog post (link in the first paragraph of this post) last night under a Japanese pseudonym, and, after e-mailing him several times last night and today, I spoke to him tonight about the wealth of information he’s turned up about that Bay scene. In fact, I could very well be correct when I say that Ron is probably the leading expert on the subject. (For some of his writings, check out his blog here. I’ll also include the edited text of the comment he made to “The Speed League” post at the end of this one.)

During our discussion, Ron clued me in to so much information and intriguing aspects about his research on Berkeley, San Francisco and Oakland and the rich existence of the American pastime there that right now I’m trying not to let my brain explode.

“The Berkeley International League, the Oakland jazz scene, the Pullman porters clubs — it’s all interconnected,” Ron said, “and it wasn’t happening anywhere else.”

In short, Ron confirmed that it is, indeed, all connected in one way or another, that minority baseball history — and, truly, all of the sport’s heritage — blends together like a multicolored melange so much in the first half of the 20th century, all despite the best (or worst?) efforts of “organized baseball’s” big wigs.

There’s no way I can encapsulate everything Ron told me or every lead he gave me for various paths of research to follow in one blog post, so here I’ll just use a few bulleted paragraphs to touch on some of the best stuff:

• It was indeed Byron “Speed” Reilly who kind of oversaw and nurtured so much that went on in the Bay Area between the 1920s-40s. The guy, Ron said, had his fingers in a lot of pies — one day writing a correspondent article for the national black wire services, the next day presiding over an inter-ethnic baseball game, and the next day putting together a Count Basie concert at a local ballroom. Reilly was a true Renaissance man who flourished near the Bay.

“This was all Byron ‘Speed’ Reilly’s handiwork,” Ron told me. “He was in all of it. That’s who he was, and that’s what he did. He was a trip. He wasn’t just an organizer, a journalist, a promoter — he was everything.

• It was San Pablo Park, the city of Berkeley’s oldest recreational area (the land was bought in 1907) that the Bay Area’s ethnic minorities — Japanese, Chinese, Jewish, African-American — came together to play ball, because it was virtually the only ball field open to all of them. 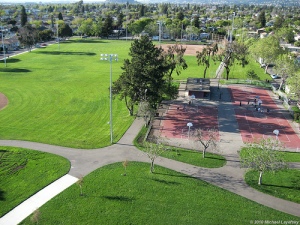 And San Pablo wasn’t vibrant just in the first few decades of the century — every succeeding generation of Bay Area ballplayers competed there, including Ron Auther’s relatives and white Major Leaguers, at one time or another.

“Baseball (in the Bay Area) was San Pablo Park,” Ron said. “That’s what it was. They basically all played there.” 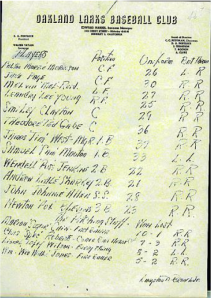 • The Berkeley Colored League, which ran for many years in the 1920s, ’30s and ’40s, and its teams were truly a source of pride of African-Americans not just in the Bay Area, but up and down the West Coast, kind of like a miniature version of the black players and teams of the larger and more well known California Winter League.

It was playing in these leagues and for these teams that the white baseball hotshots from the East Coast found themselves humbled on countless occasions by African-American and other ethnic minority players and squads. Sometimes the beat downs were so embarrassing to the white players that the mainstream press conveniently omitted coverage of such contests.

“The East Coast used to come to the West Coast and get beat up pretty badly by the Negro League teams. The white teams played the black teams to see who was best, and then nobody talked about it,” Ron said slyly.

• It wasn’t uncommon for the different ethnicities to mix on the same rosters in the Bay Area. One example was Asian-American pitcher Albert Bowen, who, as the clipping below shows, took the mound for the otherwise all-black Berkeley Pelicans when he was suiting up for the Wa Sung Asian team, which was a member of the Berkeley International League and quite a local power in its own right. 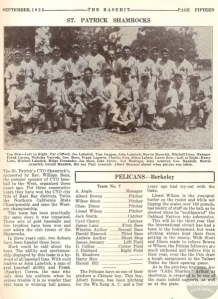 Unfortunately, Ron said, “the Asian and Jewish communities were treated just as badly as the African-American community” but, he added, “at least they had more places to play ball.” He cited the outrageous deportation of Japanese-Americans to internment camps during World War II that crippled the Japanese baseball teams in the region.

• National barnstorming teams like the Van Dyke House of David — not to mention the original House of David — always made sure to make stops in the Bay Area to play the region’s best black teams.

“The Elks and the Larks played them all,” Ron said. “When these guys rolled into town, they had standard arrangements to play (the African-American squads).”

• Finally, to end on a little personal note by Ron … the far-flung, both geographically and culturally (sports to music, journalism to promotion), national black community brought together by Speed Reilly was so interconnected in the region because, even though the Bay has been historically more progressive than, say, the deep South, famous African Americans like Cab Calloway were forced to find lodging, dining and other hospitalities among the families on the “black side” of town. (Sacramento Street sort of served as a divider between the “right side and the wrong side of the tracks.”)

In fact, Ron remembers going to house parties and barbecues at his elders’ homes that were attended by music and sports stars. The people hosting the shindigs were extremely proud of their barbecuing skills, which they passed down to successive generations, including Ron himself.

“I’m considering writing something just about my barbecuing abilities,” he said with a small laugh.

Not at all. “Speed” Reilly was based in the San Francisco Bay Area. He was a promoter, newspaper journalist, sports editor for multiple newspapers, among many other things. There’s no mistaking that. Byron was black. He was very light-skinned.

The BIL (Berkeley International League) is an offshoot of the Berkeley Colored League. People just wanted to play ball at San Pablo Park and have their skills recognized, then party afterwards. Again, Speed made it all happen — and more. He even threw events at Sweets Ballroom and Rollerland.

He was connected with the YMCA athletes and the Berkeley Sunsets Basketball team. That man had more irons in the fire than any man I’ve ever researched as a writer. My grandfather played for the Athens Colored Elks aka the Athens Colored Elites of Oakland aka the Oakland Black Giants.

His brothers played for the Berkeley Grays, The Pullman All Stars, etc. When they didn’t play on the same team, they played against each other. They played with everyone from Jim Lane, Hilary “Bullet” Meaddows, etc. — moving on to eventually play for the Oakland Larks. But “Speed” — he was a wheeler dealer, a man of action who made things happen.

One thought on “A whole world opens up …”