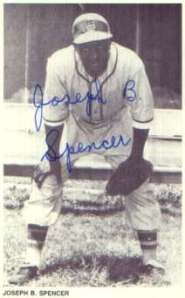 New Orleans has such an untapped, complex and compelling history of African-American baseball that virtually on a weekly basis, I uncover something, or someone, new. Unfortunately — because this shows how ignored the NOLA blackball scene has been — I’m pretty much the expert on Crescent City black hardball, almost by default.

While I’m constantly and passionately trying to uncover this rich tradition, I’m also sad that so many Big Easy baseball players have been ignored. (For  reasons that will hopefully develop this week, I’ll write more extensively about this in general terms later this week.)

One of them is the man above, utility infielder Joseph B. Spencer Jr., a native of the city of Gretna, La., just over the river from  NOLA proper. It’s where I currently live, and  where another local black baseball legend, Wesley Barrow, is apparently buried in an unmarked grave.

Gretna also bumps against the Algiers section of New Orleans. (It’s weird … A part of New Orleans, Algiers, is actually separated from the rest of it by the river on what’s called the West Bank, where separate towns like Gretna, Harvey, Marrero and Westwego also sit. Not confused  yet? Well, the West Bank is actually more to the south and east sides of the river and from New Orleans. Like I said, it’s goofy. It took me like a year to get used to it. All those towns I mentioned, btw, had their own black amateur and sandlot hardball teams at one point or another.)

The Algiers neighborhood is where Herb Simpson, former Negro Leaguer and possibly the last living link to that bygone era, has lived his entire life. He’s somewhat of a local hero, having become the first Negro Leaguer inducted into the New Orleans Professional Baseball Hall of Fame and an oft-interviewed personality by various local media outlets. (More about Herb later this week, for the same reasons to which I alluded in the second paragraph.)

Herb played baseball with J.B. Spencer. Lots of baseball, actually, from the West Bank sandlots to the Birmingham Black Barons to the Seattle Steelheads to the traveling Harlem Globetrotters baseball aggregation. And they were roommates for much of their careers. When Spencer died in 2003 at the age of 83, his obituary in the New Orleans Times-Picayune stated that Spencer was the “devoted friend of Herbert Simpson.”

“I miss him,” Herb told me this weekend. “He and I were good friends.”

“He was a real nice person,” Herb added.

Joseph B. Spencer  Jr.  was born Aug. 4, 1919, to Joseph Spencer Sr. and Alexcener Spencer. He was raised at 716 Fried St., near the corner of 7th Street. Today, Fried Street is one of the byways that bounds J.B. Spencer Park, which, sadly, I didn’t even know existed until, well, just this moment when I looked up the address on Google Maps.

Joseph Spencer Sr. was a  longshoreman on the river docks who was quite active in the longshoremen’s union in town. In fact, in the 1940s he led an offshoot labor group in an unsuccessful attempt to form its own, new union, an effort that was ultimately shot down by the National Labor Relations Board.

The neighborhood in which Joe Jr. was raised was a mixed African-American and Italian one;  several Italian families led by first-generation immigrants from the southern European country resided on nearby blocks.  One of then was the DeLuca family, headed by Frank DeLuca, who owned a grocery store.

Joe Jr., or J.B., attended Gilbert Academy and developed his passion and skill at the national pastime. While his stated position was second base, he was often used throughout his career as a utility infielder who reportedly could play any position on the field except pitcher.

Spencer began, much like Herb Simpson did, on the sandlots of the West Bank and greater NOLA area, including the Algiers Giants semipro team, where he was joined on the roster by Herb Simpson. The pair developed a friendship that lasted their entire lives.

“He was a real nice person,” Herb told me this weekend.

J.B.’s hardball career took off when he entered his 20s, and by 1941 he was a regular with the Birmingham Black Barons, who were managed by Winfield Welch, another New Orleans native who became a near-legendary Negro Leagues skipper by guiding the Barons to multiple Negro American League titles in the early to mid-1940s and, at the same time, becoming a skilled developer of young talent like J.B. Spencer. 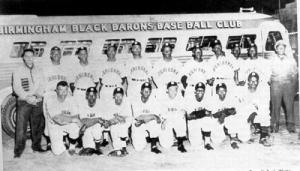 (I’ll talk more about Welch soon,  hopefully. I’ll also look at how there was definitely a funnel of talent from the Crescent City to the Black Barons, who served as the first big-time team for many a NOLA lad. In addition, from Birmingham sprang a pipeline of talent that ended up in Seattle with the Steelheads and then the Globetrotters, a migration that included both J.B. Spencer and Herb Simpson.)

Spencer stayed with the Black Barons for several years before jaunting up to Pittsburgh to join the famous Homestead Grays, who were studded with legendary Hall of Famers. When Spencer arrived at the Grays’ camp in April 1943, he was joined by yet another New Orleanian, pitcher John Wright, who would eventually anchor the Homestead mound staff and, most famously, become the second black player signed by the Brooklyn Dodgers after Jackie Robinson. (For more on Wright, see this article I did for Baseball America.)

It was with the Grays that Spencer evolved into a well regarded infielder in the Negro National League, although it was at times it seemed to be a struggle to earn the same kind of reputation as other infielders. Take, for  example, a June 1943 wire service article previewing the Grays’ upcoming clash with the New York Cubans:

“Granting that Spencer is the second base sensation of the year, he is not on equal terms with Cox, who guards the hot corner for the Cubans — and swings a mean bat.”

But such slights shouldn’t have bothered Spencer,  who helped form one of the greatest infields in Negro Leagues history with the Grays. When you’re manning the dirt with greats like Buck Leonard, Sam Bankhead and Jud Wilson, Spencer could have told the press to buzz  off.

But Spencer, much like many top-flight Negro Leaguers of the day, jumped around from team to team, and so he stayed with the Grays for just a pair of seasons before hopping to the New York Cubans — the team who a year before had allegedly been of higher quality than what Spencer could offer.

However, his stay with the Cubans was fleeting, and later in 1945 he was shipped back to Birmingham, of all places, where he reunited with Welch and led the media to state that the “second base position seems to be in good hands with J.B. Spencer.”

In all, Spencer spent roughly 15 years as a player in the various levels of Negro Leagues, a career that included a lot of barnstorming miles and a shared hotel room  with teammate Herb Simpson. Spencer then reportedly played for a few minor-league teams in the early 1950s after the integration of organized baseball before retiring, according to a May 22, 2003, obituary in the Times-Picayune.

J.B. then joined the Gretna Recreation Department, where  he was employed for many years, a length of service that certainly contributed to the city naming a park after him.

Joseph B. Spencer Jr. died May 16, 2003, and was buried in McDonoghville Cemetery in his hometown.

7 thoughts on “Gretna’s own J.B. Spencer”