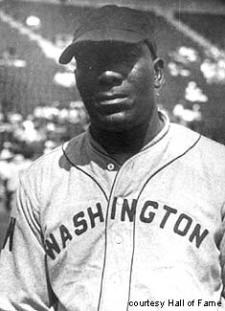 That’s a picture of Cannonball Dick Redding (from mlb.com via the Hall of Fame), a pre-Negro Leagues and early Negro Leagues hurler with, as his nickname suggests, a cannon for an arm, one that reportedly rivaled that of Hall of Famers Satchel Paige and Cyclone Joe Williams, so much so that many experts believe he should be in the Hall, too.

But for now, the Cannonball rests in Long Island National Cemetery, an honor he earned for his service in World War I.

Lately, I’ve been obsessed with Redding’s death and the circumstances surrounding it. It seems that he spent the last years of his life committed in New York State’s Pilgrim Psychiatric Center on Long Island, where he died in 1948 under “mysterious circumstances.”

I discovered this as I was researching Hall of Fame player, manager, team founder, author and journalist Sol White, a beneficiary of the efforts of the nationally-known Negro Leagues Baseball Grave Marker Project, which will hold a ceremony May 10 to unveil the new marker that was placed at White’s burial site in Frederick Douglass Memorial Cemetery on Staten Island. (White’s own death at the the Central Islip Psychiatric Center in 1955 and his subsequent burial on Staten Island are, in their own right, part of a fascinating story as well. I’ll explore that tale a little more as May 10 approaches.)

The Pilgrim and Central Islip facilities are both located in Suffolk County, New York, on Long Island. They — as well as two other “lunatic asylums” — were opened around 1930 to relieve the massive overcrowding being experienced at the state psychiatric facilities in New York City. As a result, thousands of NYC residents were shipped to the four hospitals for long-term treatment.

At the time, psychiatry and the treatment of mental illness, while continuing to evolve and progress, was still somewhat primitive. Medications to better address the symptoms of brain disorders had not yet been developed, and few private mental hospitals existed. (Those that did were usually reserved for members of the upper classes who could afford the comparatively lavish treatment.)

So, when these Long Island hospitals first existed, they were designed to house patients on a long-term basis because sufficient outpatient treatments were still in their infancy. These hospitals used methods that are rare, if not illegal, today, such as heavy electroshock therapy and lobotomies.

At its peak, the Pilgrim facility was the largest psychiatric center in the world, housing nearly 14,000 patients, most of the shipped from the Big Apple. Among those was Cannonball Dick Redding, who was living in NYC in the 1940s because he spent much of his playing career competing for teams based in the city. In fact, in the following page from the 1940 U.S. Census, he and his wife, Edna, are listed as living in West 137th Street in Harlem. Even though Redding was well into his 40s and, according to current bios, reportedly retired, his occupation is still listed as “baseball pitcher” for a “baseball team”:

Such questionable circumstances might not have been unexpected. The Long Island mental hospitals were riddled with scandals and mysteries — arsons, strange deaths, overcrowding, and accusations of verbal, physical and sexual abuse.

That included Pilgrim. In July 1942, an 18-year-old orderly, Albert Williams, was found murder in a closet, apparently strangled by, it was assumed, a patient who confessed to the crime. In 1948, a patient named August Matthes escaped and threatened to killed the state fire commissioner. In 1952, two aides at Pilgrim were charged in the death of a 37-year-old patient, Marcelo Martinez; apparently, the aides’ physically abusive attempts to restrain Martinez resulted in the fatality.

This is all going on within a half-dozen years of Dick Reddings mysterious death at the hospital, an event that, considering Pilgrim’s iffy history, might not be a surprise. In an upcoming post — hopefully tomorrow — I’ll explain why I think there might be a cover-up surrounding the baseball great’s death.

One thought on “The Cannonball mystery, Part 1”